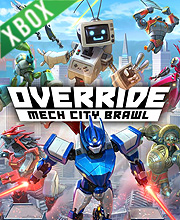 It's a digital key that allows you to download Override Mech City Brawl directly to Xbox One from Xbox Live.

How can I find the best prices for Override Mech City Brawl on Xbox one?

Allkeyshop.com compares the cheapest prices of Override Mech City Brawl on the digital downloads market to find the best sales and discount codes on trusted stores.

Override Mech City Brawl is an action mech fighting game developed by The Balance Inc and published by Modus Games for the Xbox One.

Take control of a massive roster of epic mechs, each with looks, feel and skill-set indigenous to them.

For a party with friends to have a fun-filled and action packed co-op experience or venture into combat alone in the single player mode.

Engage in explosive mech-based brawl as gigantic robots that tower over vulnerable cities.