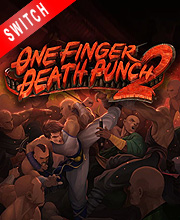 What is One Finger Death Punch 2 Game Code?

It's a digital key that allows you to download One Finger Death Punch 2 directly to Nintendo Switch directly from Nintendo eShop.

How can I find the best prices for One Finger Death Punch 2 on Nintendo Switch ?

Allkeyshop.com compares the cheapest prices of One Finger Death Punch 2 on the digital downloads market to find the best sales and discount codes on trusted stores.

A fast-paced action loaded with paradoxes and epic brawls!

At its core, One Finger Death Punch 2 has the appearance of one of those flash games from the 2000s. It doesn’t look visually impressive and the game mechanics are so basic that it’s hard to fathom how this game could provide more than a few minutes of entertainment. But that’s the big, magical mystery of this game. It takes the idea of being a Bruce Lee-esque destroyer of worlds, strips it down to people made out of lines and circles, and creates an addictive gameplay loop that becomes impossible to put down.