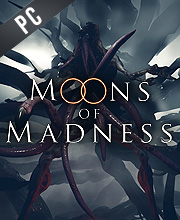 What is Moons of Madness CD key?

It's a digital key that allows you to download Moons of Madness directly to PC from the official Platforms.

How can I find the best prices for Moons of Madness CD keys?

Allkeyshop.com compares the cheapest prices of Moons of Madness on the digital downloads market to find the best sales and discount codes on trusted stores.

Moons of Madness is an adventure video game that is developed by Rock Pocket Games and published by Funcom.

The Orochi scientists of the Orochi management were able to interpret a mysterious signal that came from the red planet. Determining that this came from an intelligent life form, they opted to keep this a secret and set forth in creating a research outpost in Mars called the Invictus.

This is where you step in, you will be playing as Shane Newhart who is a technician at the Invictus, you have no idea about the mysterious signal and all you care about is doing your job in making sure that the station runs until the next team brought by the transport ship Cyrano arrives.

However, mysterious things keep on happening like malfunctioning crucial systems, a strange mist in the greenhouse and the rest of your team disappearing during an EVA mission.

Face the cosmic horror and supernatural elements that threaten your very survival. Add on the psychological aspect of isolation and paranoia as the nearest rescue team is thousands of miles away on a different planet.

PUBLISHER WEBSITE CD KEY: Use the CD Key Code to download directly on the Official Website or from the store to play Moons of Madness. Follow the instructions given by the store. Verify languages available and possible region restrictions before buying.
EUROPEAN STEAM GIFT : It’s a steam gift for Europe which requires an European IP address to activate and to play Moons of Madness on Steam. Read carefully the store description about region and language restrictions.
STEAM CD KEY : Use the Steam Key Code on Steam Platform to download and play Moons of Madness. You must login to your Steam Account or create one for free. Download the (Steam Client HERE). Then once you login, click Add a Game (located in the bottom Left corner) -> Activate a Product on Steam. There type in your CD Key and the game will be activated and added to your Steam account game library.
Standard Edition