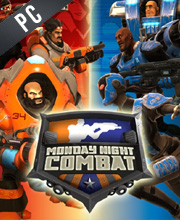 It's a digital key that allows you to download Monday Night Combat directly to PC from the official Platforms.

How can I find the best prices for Monday Night Combat CD keys?

Allkeyshop.com compares the cheapest prices of Monday Night Combat on the digital downloads market to find the best sales and discount codes on trusted stores.

It is a class-based shooter using a third-person shooter perspective where players take on the role of a clone in the gladitorial sport of the future. It’s a mash-up of intense combat, finishing moves, and game-show-like challenges and an action-filled experience like no other.

The objective is to try to protect the your team’s “moneyball”, a round ball full of money, while putting the opponent’s in jeopardy. Every game of Monday Night Combat adds more money for the player that goes towards their Lifetime Earnings.

Unique combat mechanics and diverse soldier classes make this third-person shooter addictive and entertaining. It is fast-paced, fun, and fulfilling when you get a great Grapple kill off your enemy! Hands down the best 3rd person multiplayer shooter available.

STEAM CD KEY : Use the Steam Key Code on Steam Platform to download and play Monday Night Combat. You must login to your Steam Account or create one for free. Download the (Steam Client HERE). Then once you login, click Add a Game (located in the bottom Left corner) -> Activate a Product on Steam. There type in your CD Key and the game will be activated and added to your Steam account game library.
Pack X4
Standard Edition