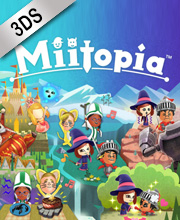 What is Miitopia Game Code?

It's a digital key that allows you to download Miitopia directly to Nintendo 3DS directly from Nintendo eShop.

How can I find the best prices for Miitopia on Nintendo 3DS ?

Allkeyshop.com compares the cheapest prices of Miitopia on the digital downloads market to find the best sales and discount codes on trusted stores.

Miitopia is a role-playing game developed and published by Nintendo. This game shows the charm of Tomodachi Life into a traditional gameplay template and the result is one of the most enjoyable and unique experiences on the 3DS.

Miitopia has life simulation elements, from standard character classes like warriors and mages, to cats and flowers but you can unlocked these as you advance through the game. You can create characters based on your favorite people using Mii avatars, with their personality influencing their role in combat. You select their jobs, gear, abilities and even a custom look. Miis and their relationships with each other out of combat affect the game. If the Miis don’t get along with one another the combat is more difficult. They have to be united so they can battle and save Miitopia!

Miitopia supports Nintendo’s line of Amiibo figures, allowing players to use unique cosmetics on the Miis. It also supports the ability to import Miis and their trait settings from Tomodachi Life, and even import them from a player’s friend list.

Guide your little team of Mii characters on a quest to defeat the Dark Lord and save Miitopia!