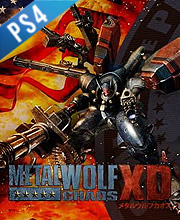 It's a digital key that allows you to download Metal Wolf Chaos XD directly to Playstation 4 directly from PSN (Playstation network).

Allkeyshop.com compares the cheapest prices of Metal Wolf Chaos XD on the digital downloads market to find the best sales and discount codes on trusted stores.

Metal Wolf Chaos is a third-person shooter game that was published and developed by FromSoftware. In the game, you assume the role of the President of the United States named Michael Wilson. As the President of a fictional futuristic America, you must protect the nation at all costs. Vice President Richard Hawk proves to be the most significant threat as he is spearheading the efforts of a rebellious military. In order to stop the resilient forces of the VP, your best course of action is to hop into your weaponized mech then pilot it through each mission. You have a stash of over a hundred weapons at your disposal from which you can equip up to eight at once. Each mission sees you engage in action-packed battles through destructible environments against the said insubordinate military forces.

Be the first one to write a review about Metal Wolf Chaos XD !