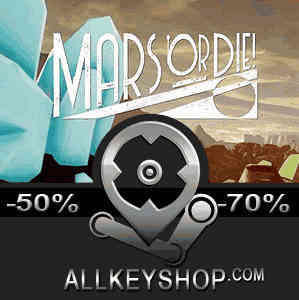 What is Mars or Die CD key?

It's a digital key that allows you to download Mars or Die directly to PC from the official Platforms.

How can I find the best prices for Mars or Die CD keys?

Allkeyshop.com compares the cheapest prices of Mars or Die on the digital downloads market to find the best sales and discount codes on trusted stores.

Mars or Die! is an action–strategy video game that is developed and published by 34BigThings srl.

Control Mars with two interesting characters namely Scout B. Bean and Major B. Bob. Scout B. Beam is an Engineering Corps that graduated top of his class. He is a fast runner and is equipped with an Energy Repulsion Shield that can deflect many-a-powerful blow. He loves flowers and beans. Major B. Bob is a part of the VI Assault Division. He is one impeccable marksman who actually moves slower but with his aim, no alien can get away from him fast enough. He loves chocolate and ballet.

You will be riding the Interplanetary Spacecraft FORTITVDO VIII which will bring you to martian soil to scout, battle with the nasty martians and build your posts. On-site mining operations and base building are all necessary for your victory.

Offering 9 missions as well as an unforgettable masterful invasion plan. Your conquest is certain! All you have to do is survive, gather, and build your way to victory.

STEAM CD KEY : Use the Steam Key Code on Steam Platform to download and play Mars or Die. You must login to your Steam Account or create one for free. Download the (Steam Client HERE). Then once you login, click Add a Game (located in the bottom Left corner) -> Activate a Product on Steam. There type in your CD Key and the game will be activated and added to your Steam account game library.
Standard Edition