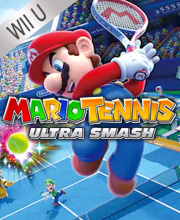 It's a digital key that allows you to download Mario Tennis Ultra Smash directly to Nintendo Wii U from Nintendo eShop.

How can I find the best prices for Mario Tennis Ultra Smash on Wii U ?

Allkeyshop.com compares the cheapest prices of Mario Tennis Ultra Smash on the digital downloads market to find the best sales and discount codes on trusted stores.

Mario Tennis Ultra Smash is a fun sports game published and developed by Nintendo for the Nintendo Wii U.

Mario Tennis: Ultra Smash game, tennis introduces some of the most crazy and joyous action of the Super Mario series. As the name suggest, it is a game in which players are rewarded for not only playing tennis but smashing the ball down the court.

The game features an all new Jumpshot which when done, grants huge advantage over opponents in the new game mode, Mega Battle. Just like your ability to smash, your wit is highly rewarded. Apply your tactical skills to defeat all your rivals. Nintendo encourages you to challenge friends to singles and doubles matches as your favorite character from the Mushroom Kingdom.

Mario Tennis Ultra Smash it’s cool game …
i love like this game … pleas help me how to play this game online …
and thank you .