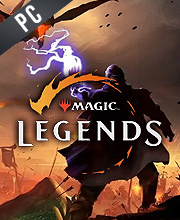 What is Magic Legends CD key?

It's a digital key that allows you to download Magic Legends directly to PC from the official Platforms.

How can I find the best prices for Magic Legends CD keys?

Allkeyshop.com compares the cheapest prices of Magic Legends on the digital downloads market to find the best sales and discount codes on trusted stores.

Become a planes walker in Magic: Legends, an online role playing game. Choose your path through diverse planes, collect unique spells, artifacts, and equipment to create powerful loadouts, and control the chaos of battle as you fight to save the Multiverse from its greatest threat yet.

Magic: Legends is a fun action RPG that has a clever deck building twist with a solid foundation, but it can’t quite stick the landing amidst a deluge of performance issues, heavy focus on grinding to unlock game features, and a less-than-ideal cash shop. Having to consider what abilities you have available in your hand at which time distinguishes its battles from a typical Diablo clone and I genuinely think with some time and patches it can get into better shape. Until then, this deck’s a bit too shuffled.

EPIC GAMES KEY : Region Free / Worldwide. Requires Epic Games Launcher App in order to play the game. You need to create a free account here in order to download Magic Legends from Epic Plateform . Read the description on the store page about any language or country restrictions.
Standard Edition