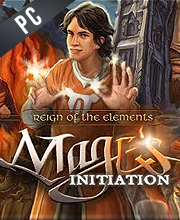 What is Mage's Initiation Reign of the Elements CD key?

It's a digital key that allows you to download Mage's Initiation Reign of the Elements directly to PC from the official Platforms.

How can I find the best prices for Mage's Initiation Reign of the Elements CD keys?

Allkeyshop.com compares the cheapest prices of Mage's Initiation Reign of the Elements on the digital downloads market to find the best sales and discount codes on trusted stores.

Mage’s Initiation Reign of the Elements is an action role-playing game published and developed by Himalaya Studios for PC. Assume the role of a 16 year old prospecting mage named D’arc and embark on a perilous journey across the medieval-styled land of Iginor.

Trod across a desolate desert wasteland riddled with lawless Bandits and fierce Burrowers. You must Navigate over an expansive lake, hopefully unperturbed by the despicable beings that lurk beneath the surface. One of your many tests includes climbing to the peaks of towering mountains where the mysterious and hostile Flyterians reside, skeptical of all outsiders.

You must indulge in three quests and complete them in order to be regarded as a Mage.

In the game you can gain new spells to improve your character and this does not include stat grinding. You may replay the game as one of four Mage classes (Water, Air, Fire, and Earth). As you may have guessed, each class comes with unique spells, puzzles, and solutions.

There are over 9,000 voiced and lip-synced speech lines which truly helps with the immersion of the game.

The game comes with a complete digital music soundtrack, perfectly themed to capture the ambiance of magic and mystery.

You have the option to combat hoards of monsters and or ignore them and focus on the adventure.

The story may also take different paths which are queued based on the choices you make. Become the ultimate mage by garnering over 50 magical gemstones to enhance your magical power.

GOG.COM CD KEY : You need to register on Gog.com, then use the GOG Key to download and activate your game to play Mages Initiation Reign of the Elements.
STEAM CD KEY : Use the Steam Key Code on Steam Platform to download and play Mages Initiation Reign of the Elements. You must login to your Steam Account or create one for free. Download the (Steam Client HERE). Then once you login, click Add a Game (located in the bottom Left corner) -> Activate a Product on Steam. There type in your CD Key and the game will be activated and added to your Steam account game library.
Standard Edition