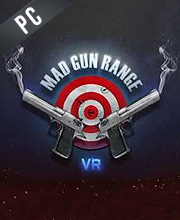 It's a digital key that allows you to download Mad Gun Range VR Simulator directly to PC from the official Platforms.

How can I find the best prices for Mad Gun Range VR Simulator CD keys?

Mad Gun Range VR Simulator is an action, adventure, simulation video game that is developed by Monkey Reality Games and published by Extreme Games. This is a virtual reality game, so a VR headset is needed in order to play.

Guaranteed full immersion to shooting, Mad Gun Range VR simulation brings its players to the modern world with amazingly realistic graphics. This is one shooting gallery that offers so much more. Players are offered a wide variety of weapons that are available today. You can choose from the most modern pistols, assault rifles, shotguns, sniper rifles, grenade launchers and more.

There will be more weapons to unlock and you can also get permission to go to a shooting range found in nature. There will be mock enemies that have hostages. Remember not to take out the hostages!

There is also a range of things that you can blow up like gas cylinders, bottles, barrels, and even pumpkins.

If you have an itchy trigger finger, Mad Gun Range VR Simulator is for you.

STEAM CD KEY : Use the Steam Key Code on Steam Platform to download and play Mad Gun Range VR Simulator. You must login to your Steam Account or create one for free. Download the (Steam Client HERE). Then once you login, click Add a Game (located in the bottom Left corner) -> Activate a Product on Steam. There type in your CD Key and the game will be activated and added to your Steam account game library.
Standard Edition. Read the store description to know the content.

Be the first one to write a review about Mad Gun Range VR Simulator !

Mad Gun Range VR Simulator is more like a mini shooting range game, it has VR support so that’s a plus for it and the controls are fine, it’s still in early access though but the deals are better than good!