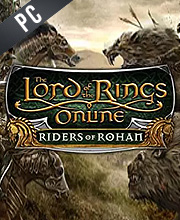 What is LOTRO Riders of Rohan CD key?

It's a digital key that allows you to download LOTRO Riders of Rohan directly to PC from the official Platforms.

How can I find the best prices for LOTRO Riders of Rohan CD keys?

Allkeyshop.com compares the cheapest prices of LOTRO Riders of Rohan on the digital downloads market to find the best sales and discount codes on trusted stores.

Besides an increase in the maximum character level (increased to 85), the extension proposes to embody the Rohirrim and fight on horseback. Players will take a little time to learn the controls but it will be without much difficulty and this aspect will bring a lot of new maneuvers and tactics so prepare for fighting in a new way which offers more realism to an already full game.

It also offers its share of territory to explore, new weapons furbished, new buildings, new beautiful scenery, well-pleasing to watch animations, realistic cutscenes and a new people that you will have the opportunity to know better. This extension is therefore a means to deepen a game already full, bringing a lot of new features, improvements, discoveries and stories, while enjoying another fight means through the horse, a cocktail gathering enough increase pleasure and play time for your happiness.

Zoom 1m 3m 1y All
Track product
PUBLISHER WEBSITE CD KEY: Use the CD Key Code to download directly on the Official Website or from the store to play LOTRO Riders of Rohan. Follow the instructions given by the store. Verify languages available and possible region restrictions before buying.
STEAM CD KEY : Use the Steam Key Code on Steam Platform to download and play LOTRO Riders of Rohan. You must login to your Steam Account or create one for free. Download the (Steam Client HERE). Then once you login, click Add a Game (located in the bottom Left corner) -> Activate a Product on Steam. There type in your CD Key and the game will be activated and added to your Steam account game library.
Bundle
Standard Edition
Compare Choose & Buy Download (791)

That is one hell of a adventure! Would be 5 stars but graphics are outdated a bit imo