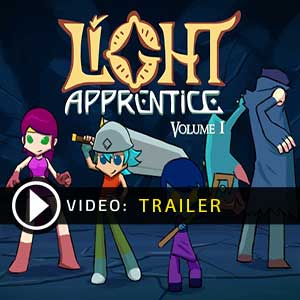 What is Light Apprentice The Comic Book RPG CD key?

It's a digital key that allows you to download Light Apprentice The Comic Book RPG directly to PC from the official Platforms.

How can I find the best prices for Light Apprentice The Comic Book RPG CD keys?

Allkeyshop.com compares the cheapest prices of Light Apprentice The Comic Book RPG on the digital downloads market to find the best sales and discount codes on trusted stores.

Light Apprentice – The Comic Book RPG is an action, adventure, role-playing video game that is developed and published by Amazu Media.

Play as Nate, a Light Apprentice who wakes up after 300 years of deep sleep. The world of Ethenia has been ravaged by war because of the corruption of the Yhrosian Empire. The planet’s environment has been badly damaged and is on course to destruction.

The only person that can help the world is Nate as well as the 4 last remaining Apprentices. Together, the balance must be restored to the environment in order for the planet to be saved.

In the game, the decision that you make will greatly affect the outcome and this will determine who your character, Nate and his friends will be. You are able to customize and evolve your characters, fight or even befriend monsters, get collectibles and extras and watch as your decisions create Nate’s story.

STEAM GIFT : A Steam gift is a one-time transfer you receive. You activate and install Light Apprentice The Comic Book RPG to play on Steam, it is a non-refundable game that stays in your Steam games collection. Please read the store description about any language or region restrictions.
STEAM CD KEY : Use the Steam Key Code on Steam Platform to download and play Light Apprentice The Comic Book RPG. You must login to your Steam Account or create one for free. Download the (Steam Client HERE). Then once you login, click Add a Game (located in the bottom Left corner) -> Activate a Product on Steam. There type in your CD Key and the game will be activated and added to your Steam account game library.
Early Access
Standard Edition