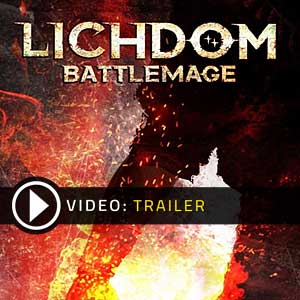 What is Lichdom Battlemage CD key?

It's a digital key that allows you to download Lichdom Battlemage directly to PC from the official Platforms.

How can I find the best prices for Lichdom Battlemage CD keys?

Allkeyshop.com compares the cheapest prices of Lichdom Battlemage on the digital downloads market to find the best sales and discount codes on trusted stores.

Lichdom: Battlemage is an action role-playing video game that was developed by independent game developer Xaviant. Described as a “first-person caster,” the player will be put in the shoes of a central character named the Dragon whose gender would depend on the player.

Living up to that title ambiguously, Lichdom: Battlemage delivers a remarkably robust spell crafting system making it a sharp-looking take on sorcery and spectacularly entertaining combat letting you feel like a kick-ass magic incarnate. Overall, Lichdom Battlemage is a heavy, fast, and mean game. You are dropped into a beautiful world and then set free to destroy bizzare enemies including everything in sight.

Be prepared because some of the content is a little extreme, and it gets even more intense as the characters develop. The spells are powerfully wicked and the blasts feel very satisfying somehow. The art is amazing, supported by captivating music which makes the whole journey which is scary yet fantastic.

Lichdom: Battlemage finally brings the glory to the magic user that it has long deserved.

GOG.COM CD KEY : You need to register on Gog.com, then use the GOG Key to download and activate your game to play Lichdom Battlemage.
STEAM GIFT : A Steam gift is a one-time transfer you receive. You activate and install Lichdom Battlemage to play on Steam, it is a non-refundable game that stays in your Steam games collection. Please read the store description about any language or region restrictions.
STEAM CD KEY : Use the Steam Key Code on Steam Platform to download and play Lichdom Battlemage. You must login to your Steam Account or create one for free. Download the (Steam Client HERE). Then once you login, click Add a Game (located in the bottom Left corner) -> Activate a Product on Steam. There type in your CD Key and the game will be activated and added to your Steam account game library.
Early Access
Standard Edition
Compare Choose & Buy Download (723)

An interesting and cheap FPS with gorgeous graphics.