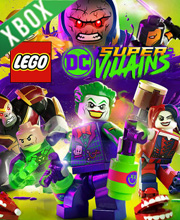 It's a digital key that allows you to download Lego DC Super-Villains directly to Xbox One from Xbox Live.

How can I find the best prices for Lego DC Super-Villains on Xbox one?

Allkeyshop.com compares the cheapest prices of Lego DC Super-Villains on the digital downloads market to find the best sales and discount codes on trusted stores.

The justice league has disappeared, a new team of heroes has taken their place naming themselves the justice syndicate, but their intentions seem less than pure. It’s up to you and your posse of world-renowned DC villains to uncover justice syndicates’ plans and put a stop to them.

LEGO DC Super-Villains offers a lot of great things to like, despite my small quibbles. The title makes up for redundant core gameplay with its sheer variety of playable characters, robust character creation suite, and abundance of side content to complete. Meanwhile, its relatively by-the-books story is bolstered by phenomenal voice acting and classic LEGO charm. It may not be the mature, gritty super-villains game that many would like, but LEGO DC Super-Villains is still worth your time and money.

It’s good to be bad in LEGO DC Super-Villains and you should let out your inner Joker by getting involved… but there’s a bit of room for improvement in this one. Batman still reigns supreme in the LEGO DC realm.

Get the Base game and the season pass

The Lego DC supervillains season pass includes 4 character packs and 6 new Levels inspired by the movies and comics of the DC universe:

The Lego DC supervillains season pass includes 4 character packs and 6 new Levels inspired by the movies and comics of the DC universe:

Two-level packs based on the Aquaman (2018) movie

A level pack based on batman the animated series and Mask of the Phantasm (1993) film.

Find all the best prices for LEGO DC Super-Villains DLC’s on Allkeyshop!