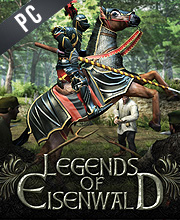 What is Legends of Eisenwald CD key?

It's a digital key that allows you to download Legends of Eisenwald directly to PC from the official Platforms.

How can I find the best prices for Legends of Eisenwald CD keys?

Allkeyshop.com compares the cheapest prices of Legends of Eisenwald on the digital downloads market to find the best sales and discount codes on trusted stores.

Legends of Eisenwald is a turn-based adventure/strategy RPG developed and published by Aterdux Entertainment.

The game boasts of carrying on the tradition of similar games such as Kings Bounty and Disciples 2, where turn-based combat is merged together with a story-driven campaign set in a medieval-themed fantasy world.

The game is set in the fantasy world of Eisenwald, a place full of supernatural elements consisting of creatures from medieval superstitions. Its campaign is extensive and contains eight scenarios and two stand-alone scenarios (The Masquerade and The Cursed Castle). With a non-linear storyline, the choices you make will greatly affect the outcome of the game, quests, and available event paths.

The game also has an original turn-based combat that is heavily streamlined, creating a dynamic form of combat that also maintains all the benefits of a tactical turn-based system but with a faster pace of play. Heroes and units are also highly customizable with deep skill trees and multiple customization options readily available to you as you progress through the game, allowing you to develop and equip your hero and troops according to your personal taste and play style.

With more than 50 hours of gameplay waiting for you, Legends of Eisenwald is going to give you one awesome experience.

Zoom 1m 3m 1y All
Track product
GOG.COM CD KEY : You need to register on Gog.com, then use the GOG Key to download and activate your game to play Legends of Eisenwald.
EU STEAM CD KEY: Requires an EUROPEAN IP address or you must activate it with a VPN (Virtual Private Network) in order to play Legends of Eisenwald. Might have languages restrictions or language packs. Read the description on the store game page to know if the EU IP is only needed for activation or for playing also (maybe on EU Servers). Most of the stores offer you their help, or show you how to do this with a tutorial to follow.
STEAM CD KEY : Use the Steam Key Code on Steam Platform to download and play Legends of Eisenwald. You must login to your Steam Account or create one for free. Download the (Steam Client HERE). Then once you login, click Add a Game (located in the bottom Left corner) -> Activate a Product on Steam. There type in your CD Key and the game will be activated and added to your Steam account game library.
Early Access
Limited Edition
Standard Edition
Compare Choose & Buy Download (743)