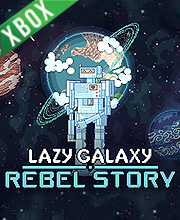 It's a digital key that allows you to download Lazy Galaxy Rebel Story directly to Xbox One from Xbox Live.

How can I find the best prices for Lazy Galaxy Rebel Story on Xbox one?

Allkeyshop.com compares the cheapest prices of Lazy Galaxy Rebel Story on the digital downloads market to find the best sales and discount codes on trusted stores.

Lazy Galaxy Rebel Story is a squad-based roguelite shoot-em-up game published and developed by Coldwild Games. The story is of an old robot named H-34-RT who awakens in a derelict space station orbiting which orbits his home planet. He discovers that his civilization was destroyed by evil O’Xelg. He must now defend what is left of his home from intruders despite being alone. You may team up with a friend in a local co-op mode or blast through enemies solo. Fly through a total of eight levels, defeating a variety of enemies on your way to the O’Xelg communication base. As of December 14, 2018 Lazy Galaxy Rebel Story is available for the Xbox One and attainable through the Microsoft Store.