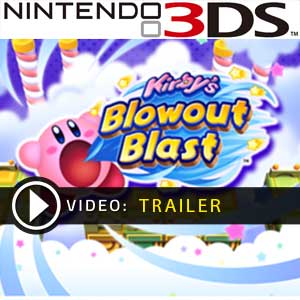 It's a digital key that allows you to download Kirby's Blowout Blast directly to Nintendo 3DS directly from Nintendo eShop.

How can I find the best prices for Kirby's Blowout Blast on Nintendo 3DS ?

Allkeyshop.com compares the cheapest prices of Kirby's Blowout Blast on the digital downloads market to find the best sales and discount codes on trusted stores.

Kirby’s Blowout Blast is an action game developed by HAL Laboratory and published by Nintendo.

In this game with 3D environments in 25+ stages you can inhale enough enemies and launch one huge Blaster Bullet that is capable of wiping out a troop of Waddle Dees, increasing your score so you are able to and go for a bronze, silver, or gold star. Another way to increase your score is to rack up a combo and the way to do that is by continuously firing at enemies but you can’t miss! Don’t worry, you can always just collect coins by jumping across platforms. As you progress, you’ll unlock EX stages, this way you will have a challenge to master. You definitely have to celebrate your victories. Tap a Kirby series amiibo figure in order to build a statue that plays new music in the plaza.

You can battle iconic bosses like King Dedede and Kracko Jr., but they are bosses of separate stages . Also, f ans of Kirby will be delighted to see that a lot of effort was made to reach the nostalgia receptors of the brain by bringing back bosses like Lololo and Lalala.

Kirby’s Blowout Blast is going back to the series’ roots with the ocasion of the 25th anniversary of the serie, being developed with the key phrase “The First 3D Kirby”.