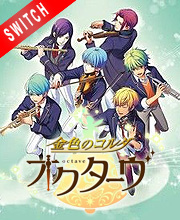 What is Kiniro no Corda Octave CD key?

It's a digital key that allows you to download Kiniro no Corda Octave directly to PC from the official Platforms.

How can I find the best prices for Kiniro no Corda Octave CD keys?

Allkeyshop.com compares the cheapest prices of Kiniro no Corda Octave on the digital downloads market to find the best sales and discount codes on trusted stores.

Kiniro no Corda Octave is an adventure game developed Ruby Party and published by Koei Tecmo Games and is available for the Nintendo Switch.

Experience the story from the perspective of two heroines. Kahoko Hino is summoned on the mysterious island called Harmony, where a musical fairy named Fata resides.

Kanade Kohinata is called to a small, uninhabited island off its coast named Cat Island.

Join the protagonist on a quest for answers for why they were called upon and if they will ever be able to return.

While seeking said rationales, the protagonists become engulfed in the island’s crisis.

You must accompany them as they join forces with musicians of another era in order to rescue the fairies. Do all you can to eventually solve the million dollar question, “will they be able to save the fairies’ island?

JAPAN BOX GAME : This is a Japan import of Kiniro no Corda Octave Nintendo Switch in Box Edition (DVD-CD ROM). This is not a downloadable product. Please read the sellers page for any additional costs (taxes, shipping), delivery time for your country and languages available.
Standard Edition