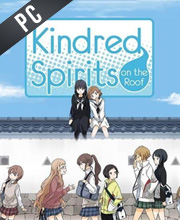 What is Kindred Spirits on the Roof CD key?

It's a digital key that allows you to download Kindred Spirits on the Roof directly to PC from the official Platforms.

How can I find the best prices for Kindred Spirits on the Roof CD keys?

Allkeyshop.com compares the cheapest prices of Kindred Spirits on the Roof on the digital downloads market to find the best sales and discount codes on trusted stores.

Play as Toomi Yuna, a regular schoolgirl of Kokonotsuboshi Girl’s Academy of Commerce. The school has a special history as it has been constructed on the location where an old castle called “Shirojo” used to be. Toomi Yuna loves spending her extra time on the school’s rooftop, one day during her lunch break, two ghosts appeared to her.

One of the two spirits is Enoki Sachi who died in an accident 80 years ago, she has a calm demeanor and a mature personality. The other spirit is Nagatani Megumi, a jealous ghost who died 30 years ago because of pneumonia.

Sachi and Megumi’s souls are forever stuck in the school’s premises and are not able to leave. The two of them are in love and would want to experience their “first-time” together to be able to be at peace and pass on, the only problem is they do not know how.

The two ghosts ask Yuna to help them inspire other girls at the school to be yuri couples. So that Sachi and Megumi can learn from them and get the information that they need before their eternal rest.

Get to follow Yuna, Sachi and Megumi and also the sixteen different character’s story in the game.

Being a happily married straight-ish female. I loved every second of this game