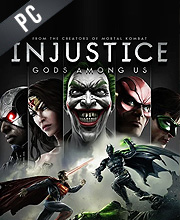 What is Injustice Gods Among Us CD key?

It's a digital key that allows you to download Injustice Gods Among Us directly to PC from the official Platforms.

How can I find the best prices for Injustice Gods Among Us CD keys?

Allkeyshop.com compares the cheapest prices of Injustice Gods Among Us on the digital downloads market to find the best sales and discount codes on trusted stores.

Injustice: Gods Among Us is an action game based upon the fictional universe of DC Comics, and is developed by NetherRealm Studios and published by Warner Bros. Interactive Entertainment.

Injustice: Gods Among Us is one of the most complete fighting games around. It’s very user-friendly, has awesome graphics, easy to pick up and play, cool characters and animations as well as a great deal of single player content. The Story Mode is particularly commendable – lasting for many hours with seamlessly integrated battles and cutscenes.

The story itself is really great specially for fans of the DC Universe, and for a fighting game it’s pretty good. It gives you a chance to try out some of the characters, and you may have to keep looking at the moves list. It has a challenging learning curve and has great variety because you have many characters to choose from.

The story telling is deep and the atmosphere of the game looks really awesome, paired with good music and sound acting, this game is a treat for fans of the DC franchise. Mechanics are flawless, thanks to the co-creator of the Mortal Kombat series.

EU STEAM CD KEY: Requires an EUROPEAN IP address or you must activate it with a VPN (Virtual Private Network) in order to play Injustice Gods Among Us. Might have languages restrictions or language packs. Read the description on the store game page to know if the EU IP is only needed for activation or for playing also (maybe on EU Servers). Most of the stores offer you their help, or show you how to do this with a tutorial to follow.
STEAM CD KEY : Use the Steam Key Code on Steam Platform to download and play Injustice Gods Among Us. You must login to your Steam Account or create one for free. Download the (Steam Client HERE). Then once you login, click Add a Game (located in the bottom Left corner) -> Activate a Product on Steam. There type in your CD Key and the game will be activated and added to your Steam account game library.
STEAM KEY ROW : It means for Rest Of the World countries which are not concerned by the region restrictions. This product can't be purchased and activated in Several countries. Please read the store description to know the full list of countries which are concerned. Use the key to Download and play Injustice Gods Among Us on Steam.
Ultimate Edition
Compare Choose & Buy Download (729)

Loved this game but compared to Injustice 2, ehh… But i love it for variety of characters.

An excellent game with a very good story mode. I recommend to everyone who likes fighting games. Worth to purchase.

This game comes from NetherRealm Studios, who brought Mortal Kombat 9 to life, and it mixes fighting game mechanics with DC characters. I’ve wanted this game for so long.