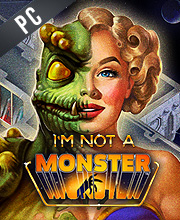 What is Im not a Monster CD key?

The CD key, or digital code, allows you to download Im not a Monster on your device directly from the game's official platform.

How can I find the best prices for Im not a Monster CD keys?

Every day Allkeyshop.com compares for you the price of Im not a Monster's CD keys in more than 70 stores and ranks them in the table below.

I’m Not A Monster is a massively multiplayer, strategy, role-playing video game that is developed by Cheerdealers and published by Alawar Premium.

Set in a retro, sci-fi world where a tourist ship is taken over by monsters. These monsters are shape-shifters that take the form of humans and are taking the passengers one by one. With no one to help, some civilians take arms and try to fight back. The only problem is, they first would have to figure out who the monsters are.

There will be a group of up to six players who will be assigned random roles. You could either be a civilian or a monster and there will only be a max of two monsters.

If you are playing as a civilian, create a team strategy, however, don’t easily trust your teammates. Suspect everyone as any one of them could be a monster. Kill as many monsters as you can and save as many passengers that you can. Be careful though as you can be infected by monsters as well.

If you are playing as a monster, your disguised appearance will help you so much. Mingle with the enemies and learn about their strategies. What’s amazing is you can also see what your fellow monster sees, so use this to your advantage. Infect as many passengers as you can, you can respawn through them is you are found and killed.

Two time-limited stages are available for both types of players. The planning stage and the action stage. First, plan your strategy and in the action stage, all actions will be done at the same time.

Be the first one to write a review about Im not a Monster !