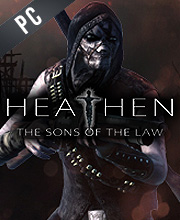 What is Heathen The sons of the law CD key?

It's a digital key that allows you to download Heathen The sons of the law directly to PC from the official Platforms.

How can I find the best prices for Heathen The sons of the law CD keys?

Allkeyshop.com compares the cheapest prices of Heathen The sons of the law on the digital downloads market to find the best sales and discount codes on trusted stores.

Heathen – The Sons of the Law is an action, adventure video game that is developed by Frog Factory and published by The Box Studio.

A game inspired by the novel of HG Wells called “The Island of Moreau”.

“Peary & Scott” an English expedition stumbles upon a strange island that is populated by weird and hostile beings. They are half-human and half-animal. They were the creations of the famous Dr. Moreau. Peary of the English expedition is actually a biologist and scientist so he continues on Dr. Moreau’s work. Scott, on the other hand, is a wealthy industrialist and has close ties with the royal family. Both Peary and Scott found potential in these creatures as a cheap source of manpower, they are strong and easily renewable.

You will be playing as one of the beasts. What you would have to do is to develop yourself, explore the island and reclaim it. You must do this while following Moreau’s law.

STEAM CD KEY : Use the Steam Key Code on Steam Platform to download and play Heathen The sons of the law. You must login to your Steam Account or create one for free. Download the (Steam Client HERE). Then once you login, click Add a Game (located in the bottom Left corner) -> Activate a Product on Steam. There type in your CD Key and the game will be activated and added to your Steam account game library.
Early Access CD Key. Play before the release date.

Be the first one to write a review about Heathen The sons of the law !

One of my favorite H.G Wells ‘s novels is The island of Doctor Moreau, good thing Heathen The sons of the law is based on it, I would like to give this a try for that reason and also because it has mostly positive reviews, Good deals like usual!