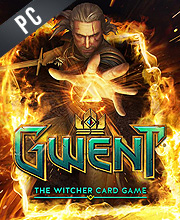 What is GWENT The Witcher Card Game CD key?

It's a digital key that allows you to download GWENT The Witcher Card Game directly to PC from the official Platforms.

How can I find the best prices for GWENT The Witcher Card Game CD keys?

Allkeyshop.com compares the cheapest prices of GWENT The Witcher Card Game on the digital downloads market to find the best sales and discount codes on trusted stores.

The players take turns in playing the cards from their deck of twenty-five to forty cards with five factions that let the player choose to command. The factions are: The Nilfgaardian Empire, Shadowy Scoia’tael, The Proud Skellige, Cunning Northern Realms, and Brutal Monsters.

Each faction offers different play techniques and unique abilities in which the player can adjust.

Bring out the best tactics and build the strongest deck by collecting new cards and deploying unique heroes, army units and rule-flipping cards to lead the game. Each card comes with a combat value, may it be Melee, Siege, or Ranged, and some cards come with an ability.

Gwent comes with a Story Campaign – which lets the player lead armies during prominent events. Ranked Matches are also available to go through player divisions and advance to the Pro League. Friend Matches will test decks, trying out new strategies, or to show rare collection, and animated cards.

My favorite card game currently. It is one where skill is more important then luck and developers care more about quality over quantity.
F2P atm

Gwent is a fun addictive card game. I’m excited to see the final version with the story mode.