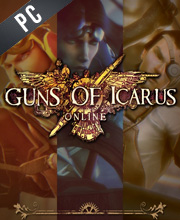 What is Guns of Icarus Online CD key?

It's a digital key that allows you to download Guns of Icarus Online directly to PC from the official Platforms.

How can I find the best prices for Guns of Icarus Online CD keys?

Allkeyshop.com compares the cheapest prices of Guns of Icarus Online on the digital downloads market to find the best sales and discount codes on trusted stores.

Guns of Icarus Online is an action, adventure, indie, simulation videogame developed and published by Muse Games. This is a steampunk, multiplayer, first-person shooter game.

A very visually stimulating game as it comes with beautifully crafted steampunk airships for you to command. Each airship can be played with up to four players with each player having a different role. Team work is the key to success in this game. The three roles to choose from is the gunner, the engineer, the pilot and of course to head the whole crew is the captain.

The captain is the one who decides which armor or weapons go into the ship. The gunner shoots down enemy airships that comes to sight. The engineer makes sure that everything in the mechanical aspect of the ship is up and running. If the airship takes a hit the engineer is the one who can save you. The pilot will be the one who will maneuver the ship strategically into attacking or evading other airships.

Make sure to choose your team wisely, as it is good teamwork as well as a good choice of an airship will put you in the lead and be the conqueror of the skies.

Zoom 1m 3m 1y All
Track product
STEAM GIFT : A Steam gift is a one-time transfer you receive. You activate and install Guns of Icarus Online to play on Steam, it is a non-refundable game that stays in your Steam games collection. Please read the store description about any language or region restrictions.
STEAM CD KEY : Use the Steam Key Code on Steam Platform to download and play Guns of Icarus Online. You must login to your Steam Account or create one for free. Download the (Steam Client HERE). Then once you login, click Add a Game (located in the bottom Left corner) -> Activate a Product on Steam. There type in your CD Key and the game will be activated and added to your Steam account game library.
Bundle
Collector Edition
Pack X4
Standard Edition
Compare Choose & Buy Download (791)