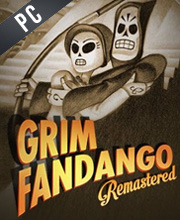 It's a digital key that allows you to download Grim Fandango Remastered directly to PC from the official Platforms.

How can I find the best prices for Grim Fandango Remastered CD keys?

Allkeyshop.com compares the cheapest prices of Grim Fandango Remastered on the digital downloads market to find the best sales and discount codes on trusted stores.

Grim Fandango Remastered is the updated version of Grim Fandango, a dark comedy neo-noir adventure game developed and published by Double Fine Productions, and was previously released in 1998.

The game’s story is divided into four acts, with each act taking place on November 2 of four consecutive years. You will take on the role of a travel agent named Manny Calavera who works for the Department of Death located in the city of El Marrow in the Land of the Dead. You sell luxury packages to souls who are on their 4-year journey to eternal rest to the Ninth Underworld.

Those who did good deeds while they were alive are rewarded with access to better travel packages, the best of which is travelling on the train called Number Nine (this train only travels for four minutes to the Ninth Underworld). Those who failed to live a kind life get to travel through the Land of the Dead to the Ninth Underworld by foot which takes around four years. It is also your job as a travel agent to act as the Grim Reaper and escort these sould from the mortal world to the Land of the Dead.

As Manny, you will find yourself getting embroiled in a conspiracy that also includes saving a kind-hearted soul called Mercedes Colomar, who was scammed and was not given the pass to ride Number Nine.

Very nice game, but difficult to complete. Attention to detail. 10!

I played this game on android before, game is worth 3 dollars, awesome game.

Hello there,
Grim Fandango Remastered one of funny games i love it so much.

jajajja, this game looks fun and funny, any of you have tried it?

I played this game on android before, game is worth 3 dollars, awesome game.