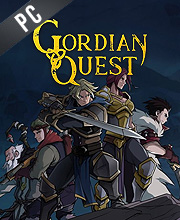 What is Gordian Quest CD key?

It's a digital key that allows you to download Gordian Quest directly to PC from the official Platforms.

How can I find the best prices for Gordian Quest CD keys?

Allkeyshop.com compares the cheapest prices of Gordian Quest on the digital downloads market to find the best sales and discount codes on trusted stores.

Gordian Quest is a party-based, deck-building RPG inspired by old-school classics like Ultima and D&D using modern gaming conventions and mechanics like a roguelike and turn-based strategic combat developed by Mixed Realms Pte Ltd and Swag Soft Holdings Pte Ltd. A sinister curse has corrupted the land, darkness reigns, monsters roam, and scoundrels pillage, but heroes will emerge to fight back. Lead them on a grand adventure to save what’s left of the world and destroy the root of the evil that has infected this world. Form a party of heroes whom you will have to lead and manage whilst going on grueling missions. Help them forge bonds with each other and discover new skills among them. Will you fall at the claws of your enemies or the consequences of your poor decisions?

Gordian Quest is a rare gem of an RPG that somehow manages to blend multiple genres into one game without making anything feel unwieldy.

If you are a fan of deckbuilding card battlers, with a dash of RPG, then Gordian Quest is the best of the bunch. While there are a few tutorial elements and stability challenges to attend to, the endless replayability and randomization element makes every run unique.

Zoom 1m 3m 1y All
Track product
GOG.COM CD KEY : You need to register on Gog.com, then use the GOG Key to download and activate your game to play Gordian Quest.
EU STEAM CD KEY: Requires an EUROPEAN IP address or you must activate it with a VPN (Virtual Private Network) in order to play Gordian Quest. Might have languages restrictions or language packs. Read the description on the store game page to know if the EU IP is only needed for activation or for playing also (maybe on EU Servers). Most of the stores offer you their help, or show you how to do this with a tutorial to follow.
EUROPEAN STEAM GIFT : It’s a steam gift for Europe which requires an European IP address to activate and to play Gordian Quest on Steam. Read carefully the store description about region and language restrictions.
STEAM GIFT : A Steam gift is a one-time transfer you receive. You activate and install Gordian Quest to play on Steam, it is a non-refundable game that stays in your Steam games collection. Please read the store description about any language or region restrictions.
STEAM CD KEY : Use the Steam Key Code on Steam Platform to download and play Gordian Quest. You must login to your Steam Account or create one for free. Download the (Steam Client HERE). Then once you login, click Add a Game (located in the bottom Left corner) -> Activate a Product on Steam. There type in your CD Key and the game will be activated and added to your Steam account game library.
Collection
Standard Edition
Compare Choose & Buy Download (743)