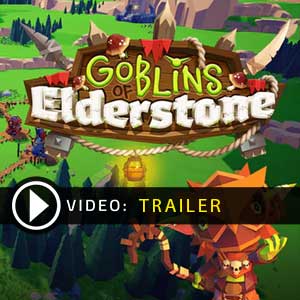 What is Goblins of Elderstone CD key?

It's a digital key that allows you to download Goblins of Elderstone directly to PC from the official Platforms.

How can I find the best prices for Goblins of Elderstone CD keys?

Allkeyshop.com compares the cheapest prices of Goblins of Elderstone on the digital downloads market to find the best sales and discount codes on trusted stores.

Goblins of Elderstone is a simulation, strategy video game that is developed by Lost Goblin and published by Crytivo.

Giving a twist to the city building genre, Goblins of Elderstone is actually a Goblin tribe simulator. Your role is to take care of a tiny clan and watch them grow to be a more capable tribe that can stand against other tribes or even the gods.

The patch you take for your clan is your choice, you can either create a trade empire, lead your tribe through faith to the gods, conquer other goblin tribes and more.

The city building aspect of the game is free-form, meaning there won’t be any orderly lines, you can be as creative as you can be. Resources are abundant with over 20 different ones that can either be gathered, stolen, crafted or traded.

Also offering some RPG elements, make friends or foes with neighboring tribes. If it is enemies that you have made, prepare to defend your tribe not only from invading enemies but also from wandering monsters, and some adventurers.

One thing is for sure, there won’t be a dull moment when goblins are involved.

EUROPEAN STEAM GIFT : It’s a steam gift for Europe which requires an European IP address to activate and to play Goblins of Elderstone on Steam. Read carefully the store description about region and language restrictions.
STEAM CD KEY : Use the Steam Key Code on Steam Platform to download and play Goblins of Elderstone. You must login to your Steam Account or create one for free. Download the (Steam Client HERE). Then once you login, click Add a Game (located in the bottom Left corner) -> Activate a Product on Steam. There type in your CD Key and the game will be activated and added to your Steam account game library.
Early Access
Standard Edition