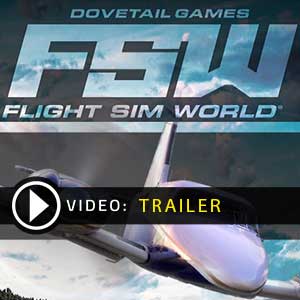 It's a digital key that allows you to download Flight Sim World directly to PC from the official Platforms.

How can I find the best prices for Flight Sim World CD keys?

Allkeyshop.com compares the cheapest prices of Flight Sim World on the digital downloads market to find the best sales and discount codes on trusted stores.

Flight Sim World is a simulation video game that is developed and published by Dovetail Games.

The ultimate pilot experience awaits in the Flight Sim World. This game will definitely give you the most real-life flight simulation ever. Aircrafts are highly detailed and places to visit are beautiful and exotic. In order to make the gameplay more interesting, weather conditions will vary in the game.

Start from the bottom and make your way up the ranks as you complete the missions that are given to you. There are seven single or twin propeller aircrafts that will be featured. The game’s weather system is powered by the truesky engine. Also, players are able to keep track of their progress through the Pilot Profile.

Players are also able to create their own aircrafts with a professional grade tool for editing. Sceneries can also be changed with the Flight Sim World SDK. Editing missions are also available that you can share with others.

The perfect flight simulation has arrived in Flight Sim World!

EU STEAM CD KEY: Requires an EUROPEAN IP address or you must activate it with a VPN (Virtual Private Network) in order to play Flight Sim World. Might have languages restrictions or language packs. Read the description on the store game page to know if the EU IP is only needed for activation or for playing also (maybe on EU Servers). Most of the stores offer you their help, or show you how to do this with a tutorial to follow.
STEAM CD KEY : Use the Steam Key Code on Steam Platform to download and play Flight Sim World. You must login to your Steam Account or create one for free. Download the (Steam Client HERE). Then once you login, click Add a Game (located in the bottom Left corner) -> Activate a Product on Steam. There type in your CD Key and the game will be activated and added to your Steam account game library.
STEAM KEY ROW : It means for Rest Of the World countries which are not concerned by the region restrictions. This product can't be purchased and activated in Several countries. Please read the store description to know the full list of countries which are concerned. Use the key to Download and play Flight Sim World on Steam.
Bonus Edition
Standard Edition