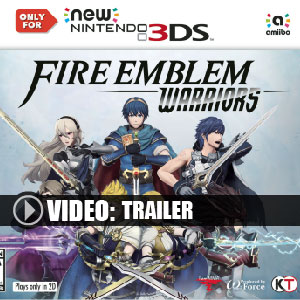 It's a digital key that allows you to download Fire Emblem Musou directly to Nintendo 3DS directly from Nintendo eShop.

How can I find the best prices for Fire Emblem Musou on Nintendo 3DS ?

Allkeyshop.com compares the cheapest prices of Fire Emblem Musou on the digital downloads market to find the best sales and discount codes on trusted stores.

Fire Emblem Mosou is an action, beat ‘em up video game that is developed by Omega Force and published by Koei Tecmo Games.

A new kingdom awaits in Fire Emblem Mosou! Fight with monsters as well as legions of soldiers as any of the original heroes from the Fire Emblem Universe. Choose from Chrom, Corrin, Ryoma, Marth, Xander and so much more. Every character is unique with different moves, special attacks, weapon types, and dialogue. New characters will be available to be unlocked as well.

In a single unit, players are able to pair up two heroes in order to create devastating combos. Switching between characters in mid-attack is also allowed.

Strategy is key, from a classic weapon triangle, you must tactically choose and switch between your characters to get the upper hand in battle!

Another amazing gameplay and storyline await in the Fire Emblem Mosou! Choose from your fan favorite characters and go against your enemies!

JAPAN BOX GAME : This is a Japan import of Fire Emblem Musou Nintendo 3DS in Box Edition (DVD-CD ROM). This is not a downloadable product. Please read the sellers page for any additional costs (taxes, shipping), delivery time for your country and languages available.
Standard Edition