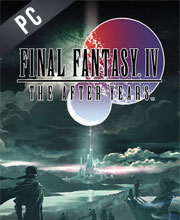 What is Final Fantasy 4 The After Years CD key?

It's a digital key that allows you to download Final Fantasy 4 The After Years directly to PC from the official Platforms.

How can I find the best prices for Final Fantasy 4 The After Years CD keys?

Allkeyshop.com compares the cheapest prices of Final Fantasy 4 The After Years on the digital downloads market to find the best sales and discount codes on trusted stores.

Final Fantasy IV: The After Years is a role-playing video game which is co-developed by Matrix Software and Square Enix. The game is the sequel to 1991’s Final Fantasy IV.

The game follows the events of Final Fantasy IV where a period of peace is being felt all around as the second moon leaves the orbit of the Blue Planet. The Village of Mist, Damcyan and Elban are being rebuilt and the kingdom of Baron is currently under the rule of Cecil and his wife Rosa.

But the peace is about to be broken because 17 years later, the second moon is back and it is causing the crystals to emit an eerie glow. You must find out what this means.

The game follows an Active Time Battle system (ATB) same with what Final Fantasy IV has. There is also an additional feature for the battle system called “Age of the Moon”, this will reflect the moon’s phases. The moon’s phases in turn will change both physical and magical attacks for the players and enemies.

Also, along with the moon’s phases are rare monsters that will appear depending on its phase. You can also get to experience the new attack system called “BAND” where one attack is composed of the commands from two or more characters of your party. These are very powerful attacks with more than 70 combinations to choose from.

You will have a grand time with Final Fantasy IV: The After Years with its great story and amazing gameplay.

STEAM CD KEY : Use the Steam Key Code on Steam Platform to download and play Final Fantasy 4 The After Years. You must login to your Steam Account or create one for free. Download the (Steam Client HERE). Then once you login, click Add a Game (located in the bottom Left corner) -> Activate a Product on Steam. There type in your CD Key and the game will be activated and added to your Steam account game library.
Standard Edition

It has the FInal Fantasy 2 Feel from the Snes. It a great remaster must have

Final Fantasy 4 The After Years is very cool game … wow …
i want play him … please help me …
and thank you so much .