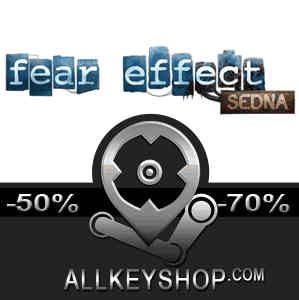 It's a digital key that allows you to download Fear Effect Sedna directly to PC from the official Platforms.

How can I find the best prices for Fear Effect Sedna CD keys?

Allkeyshop.com compares the cheapest prices of Fear Effect Sedna on the digital downloads market to find the best sales and discount codes on trusted stores.

Fear Effect Senda is an action, strategy video game that is developed by Sushee and published by Square Enix and Forever Entertainment S. This is the third installment of the Fear Effect Series.

Based on the Inuit mythology, get to explore scientific complexes that are abandoned, deep caves of Greenland, ethereal realms and underwater stations.

The spirit realm can also be explored. Here you will be able to encounter the mystical forces of the Inuit as well as the supernatural creatures of the spirit realm.

The Fear System in the game will allow for an exciting gameplay. The higher your fear meter, you will be susceptible to injury but your attacks and special abilities are boosted.

There will be a wide variety of weapons as well as character abilities to choose from like defensive turrets to flamethrowers and many more.

Get to enjoy a new culture as well as a deep storyline with Fear Effect Senda.

Collector: soundtrack, alongside a PDF art book containing imagery from throughout the game’s development process.

STEAM CD KEY : Use the Steam Key Code on Steam Platform to download and play Fear Effect Sedna. You must login to your Steam Account or create one for free. Download the (Steam Client HERE). Then once you login, click Add a Game (located in the bottom Left corner) -> Activate a Product on Steam. There type in your CD Key and the game will be activated and added to your Steam account game library.
GOG.COM CD KEY : You need to register on Gog.com, then use the GOG Key to download and activate your game to play Fear Effect Sedna.
EUROPEAN STEAM GIFT : It’s a steam gift for Europe which requires an European IP address to activate and to play Fear Effect Sedna on Steam. Read carefully the store description about region and language restrictions.
Standard Edition. Read the store description to know the content.
Collector Edition. Read the store description to know the content.

Be the first one to write a review about Fear Effect Sedna !