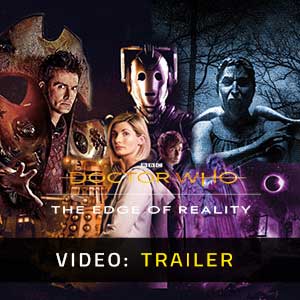 What is Doctor Who The Edge of Reality CD key?

It's a digital key that allows you to download Doctor Who The Edge of Reality directly to PC from the official Platforms.

How can I find the best prices for Doctor Who The Edge of Reality CD keys?

Allkeyshop.com compares the cheapest prices of Doctor Who The Edge of Reality on the digital downloads market to find the best sales and discount codes on trusted stores.

Doctor Who: The Edge of Reality is an action-adventure/puzzle game developed by Maze Theory, a PC and console port of Doctor Who: The Edge of Time a virtual reality game, it features an expanded level and a brand-new story chapter with the Tenth Doctor (voiced by David Tenant). The game’s main story revolves around the thirteenth doctor (voiced by Jodie Whittaker) being kidnapped and imprisoned at the edge of time and space. She managed to contact you and only you, help her solve the mystery of her imprisonment before time and space itself collapse.

This Edition of Doctor Who The Edge of Reality contains a number of cosmetics for the Sonic Screwdriver and Gloves.

STEAM CD KEY : Use the Steam Key Code on Steam Platform to download and play Doctor Who The Edge of Reality. You must login to your Steam Account or create one for free. Download the (Steam Client HERE). Then once you login, click Add a Game (located in the bottom Left corner) -> Activate a Product on Steam. There type in your CD Key and the game will be activated and added to your Steam account game library.
Deluxe Edition
Standard Edition
Compare Choose & Buy Download (743)