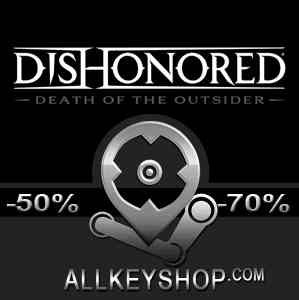 What is Dishonored Death of the Outsider CD key?

It's a digital key that allows you to download Dishonored Death of the Outsider directly to PC from the official Platforms.

How can I find the best prices for Dishonored Death of the Outsider CD keys?

Allkeyshop.com compares the cheapest prices of Dishonored Death of the Outsider on the digital downloads market to find the best sales and discount codes on trusted stores.

Dishonored: Death of the Outsider is an action video game developed by Arkane Studios and published by Bethesda Softworks. This is the next stand alone adventure from the critically acclaimed Dishonored series.

Set in the city of Karnaca, You will take on the role of Billie Lurk a tough as nails supernatural assassin. She saves her mentor Daud and gets offered one last job. Reunited with her mentor, they will try to pull off the greatest assassination ever thought of. You are set to kill the Outsider who you and your mentor believes to be instrumental to the dishonorable moments of the Empire, the only problem is that he is god-like and is quite untouchable.

You will have to venture deep into the underbelly of Karnaca in order to know more about your opponent. While hunting him down, there will be other enemies that will stand in your way like the immortal Envisioned, the merciless Sisters of the Ocular Order and the new Clockwork Soldiers.

You can either take your opponents by stealth or go at them with guns-a-blazing. Use your supernatural abilities, equip gadgets and weapons and decide how you would want to kill your enemies. Also, get to accept mission contracts and eliminate other targets.

Another great game comes your way with Dishonored: Death of the Outsider.

Be the first one to write a review about Dishonored Death of the Outsider !