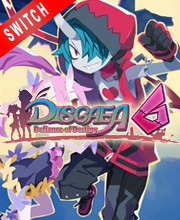 What is Disgaea 6 Defiance of Destiny Game Code?

It's a digital key that allows you to download Disgaea 6 Defiance of Destiny directly to Nintendo Switch directly from Nintendo eShop.

How can I find the best prices for Disgaea 6 Defiance of Destiny on Nintendo Switch ?

Allkeyshop.com compares the cheapest prices of Disgaea 6 Defiance of Destiny on the digital downloads market to find the best sales and discount codes on trusted stores.

Disgaea 6 Defiance of Destiny is the newest entry to the Disgaea series after a long hiatus of 6 years. This game is a tactical RPG video game and is the sixth title in the main series that will feature full 3D models for all characters (the first-ever in the series). The story revolves around Zed, a boastful zombie who possesses a special ability called Super Reincarnation. Together, he and his sister, Beiko must rise to the challenge of the enemies that will be the greatest threat to the Netherworlds.

As an existing fan of Disgaea, this new one is, despite the incredible focus on big numbers, more of the same, and that is fine by me. The extended level cap is hugely indulgent and entirely unnecessary to the tactics JRPG format, but at the same time it’s part of Disgaea’s inherent self-awareness and genre-transgressive humour. It very much wants you to see it as a silly indulgence. Couple that with the genuinely funny, satirical script and the rich tactical core that, once you peel back the excess is as compelling as always, and Disgaea 6 shows that the developers at Nippon Ichi still know how to get a player both deeply invested and laughing along with the thing. I want to say that I don’t think there’s much more that can be done with Disgaea. To me it seems that the hyperbolic potential of the series must have peaked now. But then I thought that exact same thing after Disgaea 5 and this new entry has certainly corrected me on that count.

Disgaea 6 doesn’t break the mold from its predecessors but what it does add are welcome inclusions. The art is gorgeous and the story is fantastically written, being both hilarious and heartwarming. Unfortunately, the story does slow down the action to a screeching halt. As always with the series, there are systems on systems that can become quickly overwhelming if not taken in stride, but when engaged they let you customize the game in infinite ways. Overall, I enjoyed my time with the game. It has a consistent quality that has remained interesting over the years. It may not be the best tactical RPG, but the Disgaea name still holds weight within the genre, and this entry is no different.

Disgaea 6: Defiance of Destiny may not be the best game in the series, but the strategy gameplay is still amazing if you can handle the technical issues.

The limited-edition for Disgaea 6: Defiance of Destiny features the following: