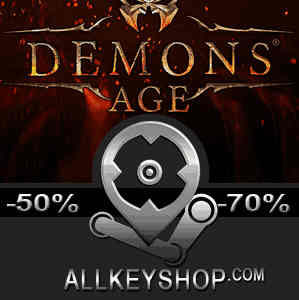 What is Demons Age CD key?

It's a digital key that allows you to download Demons Age directly to PC from the official Platforms.

How can I find the best prices for Demons Age CD keys?

Allkeyshop.com compares the cheapest prices of Demons Age on the digital downloads market to find the best sales and discount codes on trusted stores.

Demons Age is a turn-based role-playing video game that is developed by Big Moon Entertainment Studios.

Set in Moragon, a peninsula in the Northern parts of the Abidon Sea. This location was marred with a bitter past but has since then seen better days. But this peace is being threatened as strange occurrences as well as sightings of demons are getting more frequent. With the king unable to give orders it is up to Princess Pellora Lijak and her younger brother, Prince Karan to save the kingdom.

Get to explore the vast kingdom of Moragon with its ruins and dungeons. Build up your party by hiring other characters but be aware, because they can either be loyal or they can also betray you. Personalize your characters with the game’s comprehensive editor. Look for side quests that are posted on the notice boards. Search for weapons and items that will be useful to your journey. Make sure to level up your party in order to unlock better skills and spells.

Players are sure to experience an amazing adventure with Demons Age.

PUBLISHER WEBSITE CD KEY: Use the CD Key Code to download directly on the Official Website or from the store to play Demons Age. Follow the instructions given by the store. Verify languages available and possible region restrictions before buying.
STEAM CD KEY : Use the Steam Key Code on Steam Platform to download and play Demons Age. You must login to your Steam Account or create one for free. Download the (Steam Client HERE). Then once you login, click Add a Game (located in the bottom Left corner) -> Activate a Product on Steam. There type in your CD Key and the game will be activated and added to your Steam account game library.
Standard Edition

I think this is going to be a really really great game!