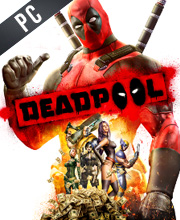 What is Deadpool CD key?

It's a digital key that allows you to download Deadpool directly to PC from the official Platforms.

How can I find the best prices for Deadpool CD keys?

Allkeyshop.com compares the cheapest prices of Deadpool on the digital downloads market to find the best sales and discount codes on trusted stores.

So much for the beginning of the story I will let you discover, as High Moon Studio has released to us as bearing the image of an unforgettable character that is Deadpool, the latter being sufficiently selfish, lazy, rude, undocumented embarrassment and so on resulting that the whole point of the story revolves around his crazy and senseless actions.

It will certainly leave us feeling as though we will be the watching the rantings of a madman. As such, High Moon Studios has perfectly managed to hold our attention, as the character is captivating and his interactions with us worked well because, yes, there is crazy talk and you brace yourself for his colorful and hilarious responses!

For the “gameplay” it is a classic beat them all with RPG elements such as character progression using Deadpool Points, obtained by making combos or by dismembering enemies. The combat phases are separated by exploration phases and cinematic scenes. Also, several times the player will perform QTE to open passages or perform various actions.

The game uses a health bar regenerating system at regular intervals, this being justified by the character’s regenerative capacity, the more damage received become directly visible thereon. Get ready to spend enjoyable moments of madness with an anti-hero who will keep you conversation lively with his sweet madness and disturbed psychology all for a nice slice of loads of fun.

STEAM GIFT : A Steam gift is a one-time transfer you receive. You activate and install Deadpool to play on Steam, it is a non-refundable game that stays in your Steam games collection. Please read the store description about any language or region restrictions.
STEAM CD KEY : Use the Steam Key Code on Steam Platform to download and play Deadpool. You must login to your Steam Account or create one for free. Download the (Steam Client HERE). Then once you login, click Add a Game (located in the bottom Left corner) -> Activate a Product on Steam. There type in your CD Key and the game will be activated and added to your Steam account game library.
Standard Edition

really great game, nice graphics and gameplay and the price not too high