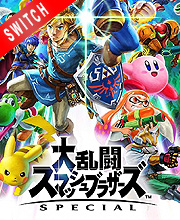 It's a digital key that allows you to download Smash Bros. Special directly to Nintendo Switch directly from Nintendo eShop.

How can I find the best prices for Smash Bros. Special on Nintendo Switch ?

Allkeyshop.com compares the cheapest prices of Smash Bros. Special on the digital downloads market to find the best sales and discount codes on trusted stores.

Smash Bros. Special or also known as Super Smash Bros Ultimate part of the Smash Bros series that has been giving its players excitement and non-stop fun for the past years. This has been the go-to epic battle royale for crossover battles between different characters from different popular games and various Nintendo franchises. The game is simple yet extremely difficult, knock of opponents from the stage and claim victory! But there’s more to it than just kicking opponents away, in this new installment of the Smash Bros, the battle gets even fiercer as you will have to be familiarized with the new Spirit feature, which is very essential before battles. Taking form from iconic characters, these Spirits can be used for either attacking opponents, boost your characters, and more. There are so many Spirits to collect and experiment with your favorite fighters. Who will be the last man standing?

Key features of the game:

Perfecting the mechanics the franchise established way back in 1999, Super Smash Bros. Ultimate is a crazy, chaotic joy. With a gargantuan roster of fighters, an amazing adventure mode and more unlockables than would ever have seemed possible, this is a game that packs one heck of a punch.

It’s an absolute joy to play and to experience, stuffed full of content, and – woeful online notwithstanding – comes highly recommended.

By combining familiar gameplay with some new ideas, there’s something in here for everyone. Smash Bros. is back and has never been better.