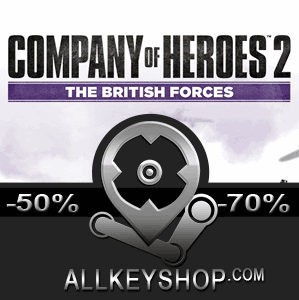 What is Company of Heroes 2 The British Forces CD key?

It's a digital key that allows you to download Company of Heroes 2 The British Forces directly to PC from the official Platforms.

How can I find the best prices for Company of Heroes 2 The British Forces CD keys?

Allkeyshop.com compares the cheapest prices of Company of Heroes 2 The British Forces on the digital downloads market to find the best sales and discount codes on trusted stores.

Combat includes controllable units that are recruited and ordered directly by the player, as well as activated support actions, such as artillery bombardment or air cover suppression. Every controllable unit type, whether infantry or vehicle, has an associated construction cost and recruitment time, as well as a range of fighting abilities.

Vehicles and infantry can eventually be upgraded by purchasing specific capabilities. Upgrades generally improve the unit’s effectiveness. Some upgrades are global, granting immediate benefits to all deployed units, while others must be purchased on a unit by unit basis. Most combat takes place through direct, line-of-sight engagements.

One of the major differences between other Company of Heroes 2 armies is that players can decide between two approaches to their British forces. As players progress through the British tech tree they’re given a choice of selecting the defensive-based structure ‘anvil‘ approach or alternatively going with the ‘hammer‘ approach that focuses on mobile and powerful units.

The expansion’s content includes a total of 15 units, six commanders with unique abilities, and eight multiplayer maps that range from a German steelworks factory to the city of Düsseldorf.

Zoom 1m 3m 1y All
Track product
EU STEAM CD KEY: Requires an EUROPEAN IP address or you must activate it with a VPN (Virtual Private Network) in order to play Company of Heroes 2 The British Forces. Might have languages restrictions or language packs. Read the description on the store game page to know if the EU IP is only needed for activation or for playing also (maybe on EU Servers). Most of the stores offer you their help, or show you how to do this with a tutorial to follow.
STEAM GIFT : A Steam gift is a one-time transfer you receive. You activate and install Company of Heroes 2 The British Forces to play on Steam, it is a non-refundable game that stays in your Steam games collection. Please read the store description about any language or region restrictions.
STEAM CD KEY : Use the Steam Key Code on Steam Platform to download and play Company of Heroes 2 The British Forces. You must login to your Steam Account or create one for free. Download the (Steam Client HERE). Then once you login, click Add a Game (located in the bottom Left corner) -> Activate a Product on Steam. There type in your CD Key and the game will be activated and added to your Steam account game library.
STEAM KEY ROW : It means for Rest Of the World countries which are not concerned by the region restrictions. This product can't be purchased and activated in Several countries. Please read the store description to know the full list of countries which are concerned. Use the key to Download and play Company of Heroes 2 The British Forces on Steam.
Collection
Master Collection
Platinum Edition
Standard Edition
Compare Choose & Buy Download (743)

Discount is not so high, also there are many DLCs for this game, still a nice game tough

instant gaming is the best site for buying this game, good luck all

I think the best store to buy this game is Instant Gaming because they are giving the cheapest price .