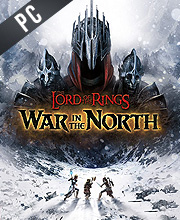 What is Lord Of The Rings War in the North CD key?

It's a digital key that allows you to download Lord Of The Rings War in the North directly to PC from the official Platforms.

How can I find the best prices for Lord Of The Rings War in the North CD keys?

Allkeyshop.com compares the cheapest prices of Lord Of The Rings War in the North on the digital downloads market to find the best sales and discount codes on trusted stores.

The Lord of the Rings: War in the North is an action role playing hack and slash video game developed by Snowblind Studios and published by Warner Brothers Interactive Entertainment.

The game does not directly adapt the story of the novel and films, but instead depicts a trio of adventurers whose quest runs parallel to the main narrative, occasionally intersecting with it.

The story follows them as they attempt to track down and defeat a powerful Black Númenórean named Agandaûr, who Sauron has employed to lay waste to the northern regions of Middle-earth, whilst Sauron himself concentrates on Rohan and Gondor.

The game features three playable characters; Eradan (a Ranger), Farin (a Dwarf) and Andriel (an Elf). When the player begins the game for the first time, they must chose which character to control.

However, they can switch characters during a single play-through either by using the “switch character” option at the end of each level, or by loading a previously saved game and selecting a different character at the character select screen. Each character has their own unique weaponry, attacks, skills and special abilities.

EU STEAM CD KEY: Requires an EUROPEAN IP address or you must activate it with a VPN (Virtual Private Network) in order to play LOTR War in the North. Might have languages restrictions or language packs. Read the description on the store game page to know if the EU IP is only needed for activation or for playing also (maybe on EU Servers). Most of the stores offer you their help, or show you how to do this with a tutorial to follow.
STEAM GIFT : A Steam gift is a one-time transfer you receive. You activate and install LOTR War in the North to play on Steam, it is a non-refundable game that stays in your Steam games collection. Please read the store description about any language or region restrictions.
STEAM CD KEY : Use the Steam Key Code on Steam Platform to download and play LOTR War in the North. You must login to your Steam Account or create one for free. Download the (Steam Client HERE). Then once you login, click Add a Game (located in the bottom Left corner) -> Activate a Product on Steam. There type in your CD Key and the game will be activated and added to your Steam account game library.
Standard Edition

Hello guys,
I have never seen a video game like this if you are a hardcore gamer
I advise you to play Lord Of The Rings War in the North