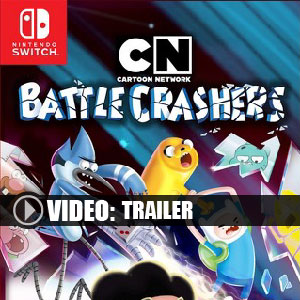 It's a digital key that allows you to download Cartoon Network Battle Crasher directly to Nintendo Switch directly from Nintendo eShop.

How can I find the best prices for Cartoon Network Battle Crasher on Nintendo Switch ?

Allkeyshop.com compares the cheapest prices of Cartoon Network Battle Crasher on the digital downloads market to find the best sales and discount codes on trusted stores.

The game has characters from Cartoon Network television series such as Adventure Time, Clarence, Regular Show, The Amazing World of Gumball, Steven Universe, and Uncle Grandpa. It was released for Nintendo 3DS, PlayStation 4, and Xbox One, on 8 November 2016 with a port for the Nintendo Switch released on 31 October 2017.

In this game, heroes have to work together to defeat enemies using crazy but funny combinations of powers in order to progress through a series of Worlds, Levels and Sublevels.

You have unlimited amount of achievements and also many hidden trophies to collect while playing with your friends and family!