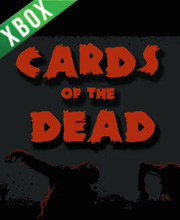 Buy Cards of the Dead Xbox One Compare Prices

It's a digital key that allows you to download Cards of the Dead directly to Xbox One from Xbox Live.

How can I find the best prices for Cards of the Dead on Xbox one?

A game developer would probably not want to see the word ‘workmanlike’ in a review, but it’s exactly what Cards of the Dead is. It’s a shabby-looking, functional little card game, which delivers just enough tension and survival horror to warrant the price tag.

Zoom 1m 3m 1y All
Track product
XBOX ONE GAME CODE : Use the Digital Code received by mail in your Xbox One account to download Cards of the Dead from the Xbox Live. Internet connection is required. Please read the store description about any language or region restrictions.
Standard Edition
Compare Choose & Buy Download (743)