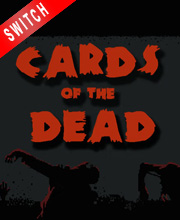 It's a digital key that allows you to download Cards of the Dead directly to Nintendo Switch directly from Nintendo eShop.

How can I find the best prices for Cards of the Dead on Nintendo Switch ?

Cards of the Dead, meanwhile, is about as engaging as Solitaire. Sure, I’ve played a game or two of Solitaire in my time when I’m that utterly bored, but that was when I was on a work computer and relying on pre-installed games, or on a boat with nothing but a pack of cards.

Zoom 1m 3m 1y All
Track product
NINTENDO CODE : This is a digital code for Cards of the Dead. Use the download code on the Nintendo eShop of your Console. Once connected to the Nintendo eShop, you can enter and redeem the Download Code. Read carefully the store description about any language and region restrictions.
Standard Edition
Compare Choose & Buy Download (743)