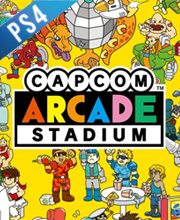 It's a digital key that allows you to download Capcom Arcade Stadium directly to Playstation 4 from PSN (Playstation network).

Allkeyshop.com compares the cheapest prices of Capcom Arcade Stadium on the digital downloads market to find the best sales and discount codes on trusted stores.

Relieve the Capcom arcade classics in Capcom Arcade Stadium, the base game comes with 1943 battle of midway for free preserved on its original arcade form but with new features to modernize the game. You can individually buy new arcade games as DLC.

A great amount of love has been put into the creation of Capcom Arcade Stadium, and it shows. It has all the features you’d expect of a retro collection and then some, alongside a wonderfully curated selection of games. Even better, you’re not forced into buying all of the games available. Granted they’re pretty much split into three packs rather than being available separately, but at least it puts you somewhat in control of the games you have access to.

The thing with Capcom Arcade Stadium is that this isn’t just a nostalgia exercise – many of these games hold up today. Designers including Tokuro Fujiwara and Akira Nishitani crafted beautiful 2D play spaces filled with energy, challenge, and luscious choreography, and these elements are still inspiring today’s shooters, metroidvania adventures, and roguelikes.

All the arcade game DLCs available for the Capcom Arcade Stadium.

A collection of Capcom arcade games from 1989-1992 when fighting games and the first beat ’em ups arrived on the arcade scene.

Find all the best prices for Capcom Arcade Stadium DLC on Allkeyshop!

PLAYSTATION CODE : This a Playstation Game Code to download Capcom Arcade Stadium PS4. Activate the code on the Playstation Network. Read carefully the store description about any language and region restrictions.
Standard Edition