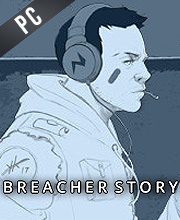 What is Breacher Story CD key?

It's a digital key that allows you to download Breacher Story directly to PC from the official Platforms.

How can I find the best prices for Breacher Story CD keys?

Allkeyshop.com compares the cheapest prices of Breacher Story on the digital downloads market to find the best sales and discount codes on trusted stores.

Breacher Story is an indie choice-based, narrative-driven experience developed and published by Doubleton Game Studio. The game is a PC-port of the 2017 mobile game Breacher.

The game’s themes revolves around the world of cyber-security, conspiracy theories and social engineering. You play as a hacker hired to obtain data from different sources on the Internet. You’ll use your skills to gain access to private email accounts, corporate servers, and everything in between.

Gameplay takes place mostly through the in-game messaging apps. You’ll need to use your social engineering skills to complete objectives. Your successes and failures determine some of the choices you’ll have in different conversations. You’ll also see how the world reacts to your accomplishments with an in-game news ticker.

As hacking games can be intimidating for the not-so-tech-savvy, the devs also implemented a dynamic glossary feature which fills up with different terms as they get used in-game. You can consult it whenever you encounter a term you don’t understand.

Zoom 1m 3m 1y All
Track product
STEAM CD KEY : Use the Steam Key Code on Steam Platform to download and play Breacher Story. You must login to your Steam Account or create one for free. Download the (Steam Client HERE). Then once you login, click Add a Game (located in the bottom Left corner) -> Activate a Product on Steam. There type in your CD Key and the game will be activated and added to your Steam account game library.
Standard Edition
Compare Choose & Buy Download (743)

Breacher Story is an indie game, the gameplay is text based where you choose from two options, game looks interesting and prices are low.