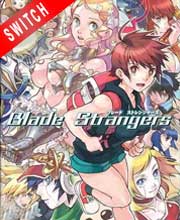 What is Blade Strangers Game Code?

It's a digital key that allows you to download Blade Strangers directly to Nintendo Switch directly from Nintendo eShop.

How can I find the best prices for Blade Strangers on Nintendo Switch ?

Allkeyshop.com compares the cheapest prices of Blade Strangers on the digital downloads market to find the best sales and discount codes on trusted stores.

Blade Strangers is a fighting video game that is published by Nicalis and developed by Studio Saizensen.

“Lina” a malicious force is eating up the data from an interdimensional network of servers. These data have been under the supervision of “motes” which are powerless against Lina. They have no choice but to summon the heroes from parallel game worlds in order to put a stop to the evil Lina.

The heroes must face off against each other in one-on-one combat. The victor of the tournament will be able to awaken the Blade Stranger which is the only hope to protect the motes from Lina.

Offering an old-school fighting game that would have a huge roster of heroes to choose from. It will include characters from some Studio Saizensen games like Code of Princess and Sayonara Umihara Kawase as well as Nicalis games like Cave Story.

There will be three alternate color settings for each character. Online competition is also available and with minimum lag. Controls are also very friendly giving beginners a fighting chance.

JAPAN BOX GAME : This is a Japan import of Blade Strangers Nintendo Switch in Box Edition (DVD-CD ROM). This is not a downloadable product. Please read the sellers page for any additional costs (taxes, shipping), delivery time for your country and languages available.
NINTENDO CODE : This is a digital code for Blade Strangers Nintendo Switch. Use the download code on the Nintendo eShop of your Console. Once connected to the Nintendo eShop, you can enter and redeem the Download Code. Read carefully the store description about any language and region restrictions.
Standard Edition