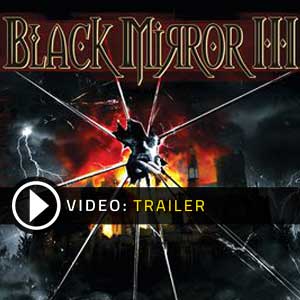 It's a digital key that allows you to download Black Mirror 3 Final Fear directly to PC from the official Platforms.

How can I find the best prices for Black Mirror 3 Final Fear CD keys?

Allkeyshop.com compares the cheapest prices of Black Mirror 3 Final Fear on the digital downloads market to find the best sales and discount codes on trusted stores.

The game continues immediately after the events of Black Mirror II, as though they are just adverts in an epic movie. The game ties together the near millennium dynasty of the Gordon family and finally reveals the secrets of The Black Mirror itself.

Black Mirror III is a classic third-person, point-and-click adventure game. You take on the role of 2 protagonists—Adrian Gordon (formerly Darren Michaels) and Prioress Valentina Antolini. Together, they have the unenviable task of breaking the terrible Mordred curse, thus ensuring that the Gordon family line will continue on. The game plays out over 6 long chapters, along with an epilogue that tries to tie up the series.

Zoom 1m 3m 1y All
Track product
GOG.COM CD KEY : You need to register on Gog.com, then use the GOG Key to download and activate your game to play Black Mirror 3 Final Fear.
PUBLISHER WEBSITE CD KEY: Use the CD Key Code to download directly on the Official Website or from the store to play Black Mirror 3 Final Fear. Follow the instructions given by the store. Verify languages available and possible region restrictions before buying.
EU STEAM CD KEY: Requires an EUROPEAN IP address or you must activate it with a VPN (Virtual Private Network) in order to play Black Mirror 3 Final Fear. Might have languages restrictions or language packs. Read the description on the store game page to know if the EU IP is only needed for activation or for playing also (maybe on EU Servers). Most of the stores offer you their help, or show you how to do this with a tutorial to follow.
STEAM CD KEY : Use the Steam Key Code on Steam Platform to download and play Black Mirror 3 Final Fear. You must login to your Steam Account or create one for free. Download the (Steam Client HERE). Then once you login, click Add a Game (located in the bottom Left corner) -> Activate a Product on Steam. There type in your CD Key and the game will be activated and added to your Steam account game library.
STEAM KEY ROW : It means for Rest Of the World countries which are not concerned by the region restrictions. This product can't be purchased and activated in Several countries. Please read the store description to know the full list of countries which are concerned. Use the key to Download and play Black Mirror 3 Final Fear on Steam.
Bundle
Standard Edition
Compare Choose & Buy Download (743)