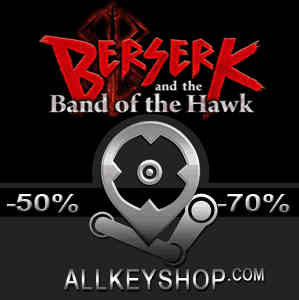 You can participate to these tests by adding comments about your digital download purchase in the store review page. Enjoy the best deals for Berserk and the Band of the Hawk CD Key with Allkeyshop.com!

Berserk and the Band of the Hawk is an action, hack and slash, role-playing video game that is developed by Omega Force and published by Koei Tecmo.

Get to play as the main character Guts, a lone mercenary who eventually joins a group of mercenaries called the Band of the Hawk. This is a time of chaos where the Midland Kingdom and Chuder Empire are at war. Uncover the intriguing journey that is set in front of you.

Hack and slash your way through hundreds of enemies with Gut’s humongous sword. Not only will you be able to play as Guts, you also have the option to choose other characters in the game that has different skill sets.

The game boasts an extensive storyline, with beautiful artwork as well as very interesting characters.

Find out what adventure awaits through the blood-soaked battlefields of Berserk and the Band of the Hawk.

STEAM CD KEY : Use the Steam Key Code on Steam Platform to download and play Berserk and the Band of the Hawk. You must login to your Steam Account or create one for free. Download the (Steam Client HERE). Then once you login, click Add a Game (located in the bottom Left corner) -> Activate a Product on Steam. There type in your CD Key and the game will be activated and added to your Steam account game library.
STEAM GIFT : A Steam gift is a one-time transfer you receive. You activate and install Berserk and the Band of the Hawk to play on Steam, it is a non-refundable game that stays in your Steam games collection. Please read the store description about any language or region restrictions.
EU STEAM CD KEY: Requires an EUROPEAN IP address or you must activate it with a VPN (Virtual Private Network) in order to play Berserk and the Band of the Hawk. Might have languages restrictions or language packs. Read the description on the store game page to know if the EU IP is only needed for activation or for playing also (maybe on EU Servers). Most of the stores offer you their help, or show you how to do this with a tutorial to follow.
Standard Edition. Read the store description to know the content.

Be the first one to write a review about Berserk and the Band of the Hawk !

where cheaper there and buy! But I choose steam with its unprecedented discounts and refunds!

At the moment g2play has the cheapest price to buy this game from ! 🙂

Unless you’re a hard berserk fan don’t buy it

One of the best japanese hack and slash games in the last few years, i def. recommend it to the fans out there. If i were you i’d go to Kinguin to grab a key right now!

Really cool game. Most definitely want the game to play for days.