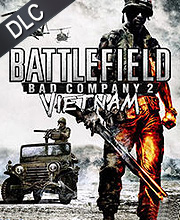 It's a digital key that allows you to download Battlefield Bad Company 2 Vietnam DLC directly to PC from the official Platforms.

How can I find the best prices for Battlefield Bad Company 2 Vietnam DLC CD keys?

Players will  benefit from the panoply of the perfect the time fighter, depriving you of the blow of modern weapon range of the base game for a complete immersion and making over the extension a game share rather than later. You will be entitled to a M16 but also the perfect kit demolisher and logistical support to confront the US military to North Vietnam army.

Continuing the success of the series, this album does not fall short of the previous titles, on the contrary, the mastery of the game engine to achieve an extension where the game-play is intuitive and pleasant, and graphically realistic and well designed, everything that makes the game fun for FPS fans and military tactics.

Developers were able  through proper IA that acts good little soldier, leaving you pride to the mission success while supporting you in your actions so logic. Here’s a title that not only showed pleasure to fans of the series who will find part of the first game, but also to discover new ones that one such model, giving to everyone pleasant hours of play.

Zoom 1m 3m 1y All
Track product
EU ORIGIN CD KEY (EUROPEAN ORIGIN CD KEY): Requires an European IP address or you must activate it with a VPN (Virtual Private Network) in order to play Battlefield Bad Company 2 Vietnam DLC. Might have languages restrictions or language packs. Read the description on the store game page to know if the EU IP is only needed for activation or for playing also (maybe on EU Servers). Most of the stores offer you their help, or show you how to do this with a tutorial to follow.
ORIGIN CD KEY : Use the Origin Key Code (Electronic Arts - EA) on Origin Platform to download and play Battlefield Bad Company 2 Vietnam DLC. You have to login to your Origin Account or create one for free. Download and install the Origin Software HERE) then you can activate the game on it. Once installed, start Origin, click on the Origin Tab and click on Redeem Product Code and just enter the key. The game will appear in your My games list.
STEAM GIFT : A Steam gift is a one-time transfer you receive. You activate and install Battlefield Bad Company 2 Vietnam DLC to play on Steam, it is a non-refundable game that stays in your Steam games collection. Please read the store description about any language or region restrictions.
STEAM CD KEY : Use the Steam Key Code on Steam Platform to download and play Battlefield Bad Company 2 Vietnam DLC. You must login to your Steam Account or create one for free. Download the (Steam Client HERE). Then once you login, click Add a Game (located in the bottom Left corner) -> Activate a Product on Steam. There type in your CD Key and the game will be activated and added to your Steam account game library.
Bundle
DLC
Uncut Edition
Compare Choose & Buy Download (743)

This DLC and bfbc2, makes a perfect battlefield. Back to the vietnam were so awesome… loved it. New guns… vehicles. Best DLC what i have bought.