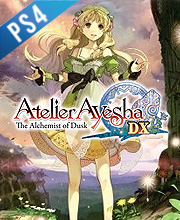 What is Atelier Ayesha The Alchemist of Dusk DX Game Code?

It's a digital key that allows you to download Atelier Ayesha The Alchemist of Dusk DX directly to Playstation 4 from PSN (Playstation network).

Allkeyshop.com compares the cheapest prices of Atelier Ayesha The Alchemist of Dusk DX on the digital downloads market to find the best sales and discount codes on trusted stores.

PLAYSTATION CODE : This a Playstation Game Code to download Atelier Ayesha The Alchemist of Dusk DX PS4. Activate the code on the Playstation Network. Read carefully the store description about any language and region restrictions.
Standard Edition

This is a great game. It has some of the best weapon and item crafting in a JRPG game. The cast of characters are very likable in this game too. Ayesha’s battle system is a lot of fun and puts up a decent challenge with a normal/hard difficulty and lots of extremely challenging optional bosses. There’s also the soundtrack which is among the very best soundtracks in the Atelier series. In this game they went all out with the soundtrack and there’s tons of great battle themes, amazing boss themes and the soundtrack is a strong one where almost every song is memorable. This is a must play game. Some may ask about the time limit. Yes Ayesha has one.